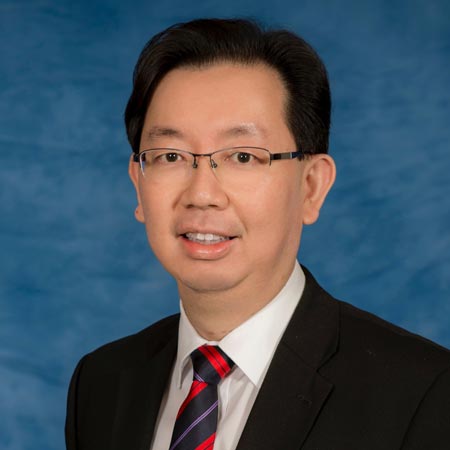 Professor and Chief, Division of Colorectal Surgery, Department of Surgery

The Chinese University of Hong Kong

Prof Simon Ng graduated from the medical school of The Chinese University of Hong Kong (CUHK) in 1995 with 7 distinctions and was awarded the honor degree and double Gold Medals. He passed the Joint Specialty Fellowship Examination in General Surgery in 2002 with highest marks and won the Li-Shields Medal. In 2013, Prof Ng received his Medical Doctoral Degree with Commendation from CUHK for his research thesis on the long-term outcomes of laparoscopic surgery for rectal cancer.

Prof Ng is currently Associate Dean (Student Affairs) of the Faculty of Medicine, and Professor/Chief of the Division of Colorectal Surgery, Department of Surgery, CUHK. He is the President of the Hong Kong Society for Coloproctology, a Council Member of the Hong Kong IBD Society and the Hong Kong Society of Robotic Surgery, an Honorary Member of the Korean Association of Robotic Surgeons, a Board Member of the Asia Pacific Endo-Lap Surgery Group, a Fellow of the American Society of Colon and Rectal Surgeons (ASCRS), and the International Chair of the Global Reach Committee of the European Society of Coloproctology (ESCP).

Prof Ng’s main clinical and research interests are minimally invasive/robotic surgery and advanced endoscopic therapy for colorectal diseases, multimodality treatment for colorectal cancer, colorectal cancer screening, biomarkers for colorectal cancer, and integrative medicine. He is the first colorectal surgeon in the world to perform robotic colorectal surgery using the da Vinci SP Surgical System. He has published over 200 articles in peer-reviewed journals, including first-authored publications in top-notched journals such as Lancet, Gastroenterology, and Annals of Surgery. His research work in colorectal surgery has earned him a number of international and national awards, including the Northern California Society of Colon and Rectal Surgeons Award of the ASCRS (2008), the International Guest Scholarship of the American College of Surgeons (2010), the GB Ong Traveling Fellowship (2011), the British Journal of Surgery Prize of the ESCP (2011), the Royal College of Surgeons of Edinburgh China Medal (2014 and 2016), the Ministry of Education Higher Education Outstanding Scientific Research Output Award – First-class Award in Natural Sciences (2014), the State Natural Science Award – Second-class Award (2016), the Outstanding Fellowship of the Faculty of Medicine, CUHK (2019), and the Shanghai Medical Science and Technology Award – First-class Award (2019).

On the pedagogical side, Prof Ng had received eleven Teacher of the Year Awards of the Faculty of Medicine from 2005 to 2018, and the Master Teacher Award in 2011. In recognition of his outstanding performance in the surgical profession and his contribution to the community, Prof Ng was selected as one of the awardees of the Ten Outstanding Young Persons of Hong Kong in 2010.